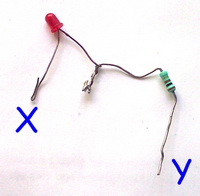 Some convertors have Comms LEDs on them to help with troubleshooting.  When SpecView is working normally, there should be activity on the Tx LED followed immediately by the Rx LED.

Some instruments have Comms indicators on them too, check the Instrument manual for what these are and how they work - some Instruments flash the LED whenever there is traffic on the link, others flash only when they are addresses specifically.

If there are no LEDs anywhere in the system, thej it can be quite useful to make one up to help in troubleshooting.

Get a standard LED (NOT a flashing one) and a resistor of around  100ohms  (Resistor colour code Brown-Black-Brown). You can buy these things from Radio Shack in the USA or Maplin in the UK, or from other electronics suppliers.

Wire them up in series - twist or solder one leg of the resistor to one leg of the LED, as shown in this picture - it does not matter which way round the LED is wired, we will deal with that later.

Next, with SpecView NOT running, find the terminals of the RS485 converter, they will be labelled in one of several kinds of ways, depending on the manufacturer:

Find the pair that is Transmit (or if there is only one pair, then that’s the one!) and connect the LED/resistor pair onto the terminals.  For example, in the above picture, connect the X end to TDA and the Y end to TDB.  Please read this note about safety here!

Remember which way around the LED needs to be so that it is OFF most of the time.

Now start SpecView and check the Comms Backoff - see here. Go into Runtime mode so that SpecView is trying to communicate to the instruments.

Now when you hold the LED/Resisitor on the terminals, the LED should flash dimly every one or two seconds - this is correct, it shows that SpecView is trying to communicate out of the port.  If you get nothing, then the problem is likely to be one of:

If the LED check shows that SpecView is communicating out of the converter, you could try to see if the same flashing is present on the terminals of the instrument at the other end of the line.  Please read this note about safety here!

SCADA software for people with other jobs!